The Stunned Buzz Of Resurrection* 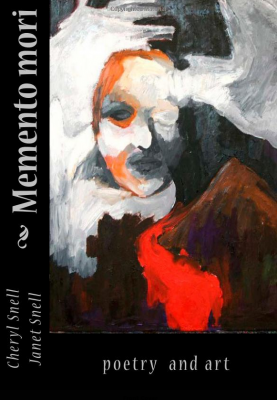 "Of all the arts, abstract painting is the most difficult. It demands that you know how to draw well, that you have a heightened sensitivity for composition and for colors, and that you be a true poet. The last is essential."

It may seem a little odd to begin a review of poetry with a quote about artists, but the Snell sisters don't make such distinctions easy. While each is pledged to keep her own internal boundaries, so that Janet's pictures are not a direct expression of Cheryl's poems, but rather conjure the atmosphere of them, it is plain that both are consummate artists, one with well-honed quill, one with a psychogenic brush.

The 'heightened sensitivity for composition and for colors' applies equally to 'true poet', Cheryl. Her verses are a riot of color, sometimes named colors from the palette. She speaks of 'blue irony' and 'the indigo moments before bed' and 'alizarin, vermilion, cadmium, red wings beating everywhere at once'. Those who paint, or spend a lot of time in galleries, know how shades of red vibrate and redefine a whole canvas. Then there are the subtler hues, as in the gentle poem, Aura.

A spray of seven colors

It falls back to earth,

around a thin yellow foot

it mistakes for the sun.

Cheryl's mastery of language is breathtaking, her phrases turned with lancet-precision. The montaging of constrasted images taps deep into the soul and releases elusive truths with the chaste simplicity of oxygen bubbles rising to the surface of a lake. You can feel at one with the unfurling torsion of spring, its sinews newly braced, in Poem With Spring Fever, opening you up to growing possibilities beneath a benevolent sky.

The perspectives range from under-your-nose through middle distance to wide blue yonder, with close-up shots that refuse to freeze and leave you on the crest of longing. A broken spider's web is 'a ruination of silk geometries' while 'In the stunned hush of its own snapped strands, the spider writhes and rolls in a ransom of insects.' Hope describes 'how the glazed sky hurled through will feathers will sometimes part like water for one bird.'

And who, in love, has never been poised on this precipice described in Closer?

My senses are a balcony

its constant ticking. I wait,

a flicker of light upon the spine,

from my high place.

The rooms sway, and I know you

are near, the train pulling

eyes on the door,

your hand opening the cab's yellow

into the rush-hour surge.

This is not poetry merely to beguile the imagination; it is experience by vital proxy, full of pulse and texture and radiance.

Memento Mori is a tour de force. I cannot praise it enough and feel privileged to have had the chance to review such a gem. The book is well-produced and does credit to poet and painter on every level. Janet Snell's expressionist art - vaguely reminiscent of Edvard Munch but intensely unique - broods over these pieces, depicting shape and shadow from the hazy layers of the subconscious. These presences shifting through space are the masks we tow our troubled worlds behind.

If the title suggests that Wordsworth's Intimations of Immortality has been turned on its head, then it would certainly be misleading. This book is life-affirming to a degree and proves the paradox that there is still life beyond the barbed reminders of human transience.

See Reviews and buy on Amazon

What a fascinating article that touches on a favourite subject of mine: the criss-crossing of creativity. How did you come across such a treasure?

0 Cancel Reply
What a fascinating article that touches on a favourite subject of mine: the criss-crossing of creativity. How did you come across such a treasure?
Cancel Update Comment

Thank you, Nicholas! Yes, I can see how this would echo for you with your interest in writing and photography. What's remarkable about the Snell sisters is how linked they are on every plane, how complementary, more so than some twins I have known.

Cheryl is a friend I first encountered on our former forum.

0 Cancel Reply
Thank you, Nicholas! Yes, I can see how this would echo for you with your interest in writing and photography. What's remarkable about the Snell sisters is how linked they are on every plane, how complementary, more so than some twins I have known. Cheryl is a friend I first encountered on our former forum.
Cancel Update Comment

Stephen Evans
Invictus
Out of the night that covers me,       Black as the pit from pole to pole, I thank whatever gods may be       For my unconquerable soul.  ...
2 comments
Read More

Monika Schott PhD
Without the beat of any drum
Weaving and swirling, casting a hand of stealth healing. High they fly, low they crawl. Magical. Merciful. Gracious and humane, forever genuine. They...
0 comments
Read More

Monika Schott PhD
The three Cs
A friend recently reminded me of the power in kindness when she asked, what makes an urban area kind? My first thought was, how can an object or mass...
2 comments
Read More

Rosy Cole Invictus
30 August 2020
Loving Shepherd of Thy sheep, Keep Thy lamb, in safety keep; Nothing can Thy power withstand, None c...

Monika Schott PhD The three Cs
26 August 2020
True, Rosy. Kindness can change anything; it can soften a heart, arouse a smile, and much more. ?

Rosy Cole The three Cs
24 August 2020
True kindness has the power to change circumstances, whether given or received. Kindness makes the w...