Tweet
Recent Comments
Rosy Cole
Exactly! I see you have taken up Professor Stanley Unwin's mantle as to the manner born :-) https://www.youtube.com/watch?v=R2nI... Read More
Friday, 09 June 2017 15:11
Nicholas Mackey
How can one take this political charade with any degree of seriousness? Many thanks for commenting, Rosy.
Saturday, 10 June 2017 13:41
Rosy Cole
I suspect what we find most uncomfortable is that our Government leaders force us to take a good hard look in the mirror.
Monday, 12 June 2017 15:12
1761 Hits
3 Comments

A House of Peace

Some dear friends of ours from Delhi we have known for many years invited my wife and I to stay with them. During our visit there, I met a retired general from the Indian army

He was an uncle of one of our friends: a distinguished-looking man with a wealth of stories, a bushy grey beard and an impish sense of humour. This former military figure told me a tale of being posted some years previously to the Ladakh region of India by Pangong Lake (the local name meaning long enchanted lake) on the northern frontier with China as commanding officer (CO) of a contingent of soldiers on border guard duty in this far-away place

This elderly army man described the dramatic landscape he and his men found themselves in surrounded by high mountains and rocky ground. There were no signs of civilisation for many miles where the men were planning to set up camp save for a small roofed dwelling in their midst. It was unlived in, empty, abandoned

Instead, he proposed that this small building should be used as a divine place of worship and he too would sleep with his men under canvas

While his junior officers welcomed his proposal they politely reminded him that there might be a problem with his suggestion: among all the personnel serving in this group, there were Hindus, Muslims, Sikhs and Christians – how could they share this building at prayer? It seemed out of the question with four religions sharing the same space and all under the same roof. It had never been done before

“No problem,” said the practically-minded general unfazed by this apparent impasse when he gathered his subalterns around him to give them guidance in how to use this isolated house as a proposed shared place of worship. Following him they all trooped inside and with confident gestures the general responded to their hesitancy. “In this corner, we will have the Hindus” as he indicated one corner of the interior. He turned saying “And in this adjoining corner, we will have the Muslims praying.” His officers exchanged puzzled glances but the CO carried on unhindered by these received ideas turning around to point out the other two corners which would be occupied by the Sikhs and Christians respectively

At this point, the junior officers overcame their understandable reticence in not wishing to appear insubordinate to their CO as they felt that this was pushing social cohesion among the troops too far given the unhappy and bloody history of religions occupying the same space and they made their feelings plainly known. Much discussion ensued. Well-articulated stumbling blocks were raised

The general listened patiently to what they had to say. He demonstrated sympathy to the many points of view expressed. Then, calmly but firmly he overruled their stoutly-voiced objections and his command was put into effect. The dwelling was modified to accommodate these four persuasions and holy books of the faithful and other necessary holy accoutrements were gathered in the four corners assigned to each belief and all preparations were carefully rendered sensitive to each tradition

A few days later, the general visited this unique place of worship where two thirds of the nearby enormous Pangong Lake lies within China and the remainder of this stretch of water is Indian territory. The CO went into the small house and he observed that some of the soldiers were inside utilising each of the four corners assigned to their respective religions and all praying simultaneously

All was well, there was harmony. The general confessed he was moved at the display of unity as he joined his fellow men under the roof of this special place

Life and Death and Life Restored on Westminster Bridge 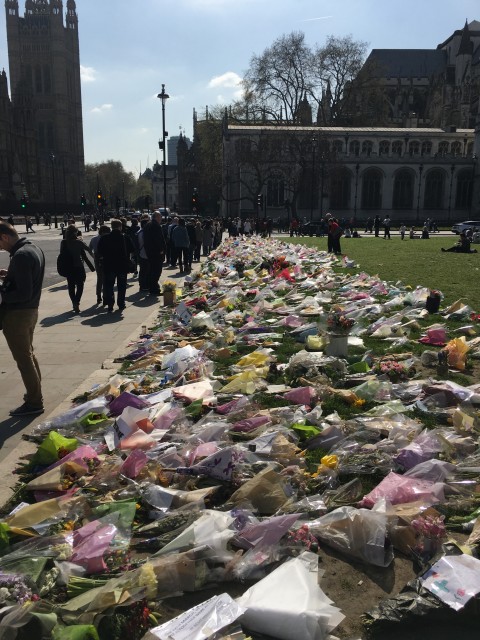 ‘a sight so touching’

‘cos he was there.

the injured and the dying

may set us back

out of this tragedy,

of London is restored,

and our desire to

A poem, in memoriam,

Tweet
Recent Comments
Rosy Cole
Hi Nicholas! If nothing else, one thing the tragic attack on Westminster Bridge clearly shows is that Britain is a multicultural... Read More
Sunday, 09 April 2017 17:16
Nicholas Mackey
Thank you for commenting Rosy. Last week, I visited the area around Westminster affected by this tragedy and was deeply moved by ... Read More
Wednesday, 12 April 2017 13:06
Rosy Cole
There's nothing to compare with actually visiting a site for bringing the reality home. I find this again and again as an historia... Read More
Friday, 14 April 2017 19:00
1778 Hits
4 Comments

Does a city have an ebb and flow like that of the sea?

Do the movements of people and traffic in an urban space mimic that of the tidal advance and retreat?

How does it feel when you have to navigate a strange town without your bearings as if trying to find your way in uncharted waters?

Or, possibly the sea can join together a city split between east and west.

Maybe the sea can act as a balm to troubled souls.

Or, perhaps the sea can wash away the sins of the world.

Does the sea have an ebb and flow like that of the city?