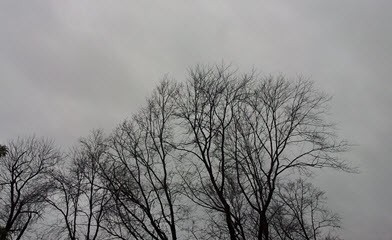 In Winter rain, the birds are flying

I can’t help wonder why.

Why this one flies to that.

Why those descend to there.

Are they seeking shelter

In the memory of leaves?

Do they console the trees?

Or do they think

to bring back Spring

By force of will?

In the corner I am here

Standing as I do every year

So the light that shone for them

May shine for you.

“All-changing time now darkens what was bright,
Now ushers out of darkness into light”
Horace

For much of his life, my father managed an appliance store called General Electronics at 4513 Wisconsin Avenue in Northwest Washington DC, just up the street from American University. There's a Starbucks there now I think.

In DC, this was a booming market. My father knew the procurement officers from embassies, consulates, and military posts all over the world, as well as many of the staffers from foreign embassies in DC. I remember one of the staffers from the Norwegian embassy would bring us lefse from the home country, a boyhood treat Dad craved.

I worked at the store most Saturday’s from age 12 or so, as did my three brothers. After a few years, I knew the electrical specs for pretty much every nation from Japan to Jordan. I wasn’t as introverted then and enjoyed being on the sales floor, meeting people from all over the world,  surprised to find how much they valued things I took for granted, like washing machines and refrigerators.

The General Electric company offered sales incentives, and Dad often brought home new televisions or appliances, including the microwave my mother wouldn’t use at first. But their favorite incentive was travel. GE would host trips for groups of top salesmen (I suspect back then they were all men). Often the same people would go on subsequent trips, and they made  some lasting friendships and stayed in touch long after my father retired.

So once every couple of years, my parents would fly off to Europe and other destinations that seemed so exotic to me. The world felt larger then, yet despite the nuclear threat of the cold war, somehow safer.

I don’t remember all the places they went. Paris for sure. Madrid. Mexico City (twice I think). Acapulco.  Italy. Probably others.

I could figure it out. They took hundreds of photos, now stored away in a box until I get around to digitizing. They also kept matchbooks from all their travels, and my mother bought dolls from many countries.

And they bought other souvenirs. A painting of the Madonna from Spain. A silver ring (two actually, on different trips) from a Mexican silversmith. A replica of Michelangelo’s David. And three miniature marble Pietas. 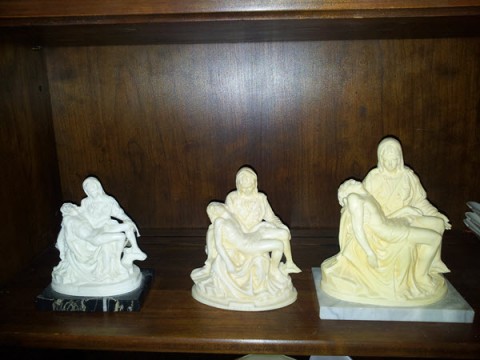 I’m guessing the Italy trip was my mother’s favorite. A devout Church-Every-Sunday-Sodality-On-Saturday-Make-Your-Children-Go-To-Sunday-School-Even-Though-Its-On-Monday Catholic, she must have been enthralled by Rome. She visited the Vatican, saw the Sistine Chapel, had an audience with the pope (John or Paul, I’m not sure which) (and I don’t mean Beatles). And bought three copies of the Pieta, Michaelangelo's statue depicting Mary holding the body of Jesus.

They are sitting side by side now in the china cabinet, with the other curios she assembled, like the girl and puppy porcelain statue I have written about elsewhere. The Pietas differ in size by maybe half an inch, and have slightly different shades of white, from snow to cream. Perhaps the color has aged, or the marble is just different.

I have often wondered why she bought three. I never thought to ask while she was alive. Did she intend them as gifts? Did she plan to give them to her four sons? (I got the David, so maybe the three Pietas were for the others, who obviously needed more spiritual help).Did she want to help the artists who carved them? Or was she just so overwhelmed by the spiritual experience?

I don’t know. I’ll never know I suppose. The three pietas will always be a mystery, unless she was right in her belief, and we will all be together someday, and I can ask her. It would be like her to think that far ahead. She was a great planner, with a wry sense of humor. I can see her smiling as she bought them, thinking of how puzzled I would be many years later.

If she was right, one day (or no day) I will know the answer. And be overwhelmed by the spiritual experience myself.

Yet, in some sense, it is the wondering that I crave. Keats had a phrase, negative capability, the willingness to live (and create) in a state of irreducible not knowing. In a state of wonder.

Those who reduce belief to a kind of knowing may be missing this point: the gift of wonder is the essential condition of religion, of art, maybe of sentient life, essential because it impels us forward, closer to that now unreachable truth.

So I wonder about those three pietas. I really do wonder. 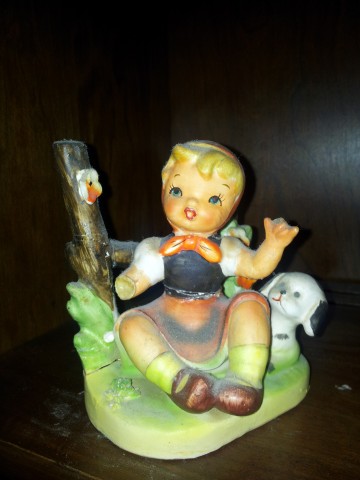 Kintsugi (金継ぎ) is the Japanese art of repairing broken items with gold. The gold highlights the area of the breakage, with the idea that the history of the object is part of its beauty. My father practiced his own version of Kintsugi, though not with gold. Exactly.

My mother owned a small porcelain statue of a girl and a puppy, a Hummel or something like. It is an endearing image, or it was originally. With four boys and a continuing series of dogs in the house, that poor little girl endured many accidents during the fifty or so years she has graced our presence. The puppy somehow escaped mostly unscathed.

My mother loved the statue. So every time it was broken, my father brought out the Elmer’s glue and painstakingly tried to put her back together. I can’t begin to count the number of times, or ever forget the image of my 6’ 4’’ (and a half he would insist, just like John Wayne) father hunched over the table with his calloused hands tracing the delicate porcelain pieces with a toothpick, painstakingly applying the white adhesive.

The result was never perfect, or even close. Seams are visible everywhere. Some parts never fit back together right. Some are gone completely. But it is still Kintsugi to me–the mending preserves their history together. The gold is in the memory.

The statue now sits on the top shelf of my china cabinet, safely keeping company with other vestiges of that era. I think sometimes of giving her away. But I haven’t. I can’t. Who but me will see the decades of love melded in the mending? Who but me?

And that is mending too.