(An excerpt from A Transcendental Journey, available at an internet near you)

The little booth stood alone, completely isolated and the only thing taller than the tall grass across miles and miles of treeless prairie, as if some enterprising soul had erected a booth at a random spot and was charging a toll to Nowhere. As I approached the booth, I surrendered to the surreality and obediently paid the entry fee (six dollars again, though I was half-expecting to owe a gold coin from under my tongue).

Beyond the booth, the wind picked up from the west and a ghostly horde of tumbleweeds swarmed over the rise. Fortunately, my sturdy Cavalier was able to fend off the rolling weed phantoms until I arrived safely at the so-called developed area of Badlands National Park.

If you find an old guidebook, you can still see the park referred to as Badlands National Monument, since that's how the area was first designated in 1939. In 1978, the area was redesignated a National Park, for which I was extremely grateful. I don’t always learn a lesson the first time around and searching for monuments in Badlands National Park would have been a challenge. The park covers almost 250,000 acres in southwestern South Dakota, over 64,000 acres of which are designated as Wilderness area. Only a small area of the park along the Loop is developed, which in Badlands parlance means someone stopped there once.

Farther along, the Loop began to actually loop, curving around to the west, until a solitary parking lot came into view. A ridge about fifteen feet high blocked the view to the south. In every other direction, only scrub brush and bare rock were visible. I had paid the toll to Nowhere. Now here was the parking lot. I pulled in, figuring I might as well get my money's worth.

Along the base of the ridge ran a concrete path called the Notch Trail, a name not especially comforting, recalling as it did images of gunfighters and Colt 45s. I walked warily, hoping that Nowhere would eventually end up Somewhere.

Not far down the trail, the ridge dipped sharply for a few feet (oh, that kind of notch). As I stepped up into the opening, the parched treacherous earth slipped away under my feet. Struggling to find a foothold, I leaned far out through the V-shaped opening.

A number of times on my journey, I was misled by names. The Plains weren't plain. The Black Hills were green. I won't even start about Devil's Tower, except to say that it wasn't. I saw no yellow in Yellowstone.

Language is instinctive in humans. Linguistic patterns are genetic in origin, just like the ability to distinguish shape and color. DNA can be considered a language of sorts (which I suppose makes sex a conversation).

Names are all too human, an inborn efficiency of our species, a function, a power. We impose our nominal fashions on the universe to dress it according to our needs, tools of thought and survival and naturally selective expedience. These names strangle our understanding, twisting our impressions into form-fitting packages.

Names represent classes, congregations, groups. Yet a name is a distinction, a methodology of simplification, of inclusion and exclusion. But in a search for a common identity, we sacrifice individuality. It's a poor exchange. Rose is not a rose, nor is a rose a rose.

Names point to facts. Facts are seductive. Names are seductive. Distinctions, though occasionally factual, are inherently not True. In all the universe there is only One and All.

Symbols are the opposite of names. Names are walls. Symbols are doorways. As a child I watched an eclipse by punching a hole in cardboard and observing the solar projection. Symbols are like that, the earthbound projection of a celestial event blazing through a slit onto the palm of a hand, the visible glimmer of the fireball.

Today we have lost the knack for symbols. The power of symbols has gone missing, faded to names, phantoms not flares. The mass of us lead desperate lives of quiet abstraction.

The name badlands refers to any arid area that exhibits high rates of erosion. Nothing in the name prepares you for the view.

Five million years ago, the same geological forces that created the Rocky Mountains also raised part of the broad MidAmerican plain. The White river, which now flows miles away from the park, eroded the rock and volcanic ash that make up the plain, carving over eons a cliff. Even now the exposed face of the upper plain, called the Wall, continues to erode about one inch per year.

The Wall extends for miles along the face of the plain. Of varying height, the broken surface exposes layer on geological layer of soil and rock and compacted volcanic ash, each layer three or four feet high and marked by distinct color changes.

That is the geology.

The phenomenology is harder to explain.

We never knew the wasteland would be beautiful. 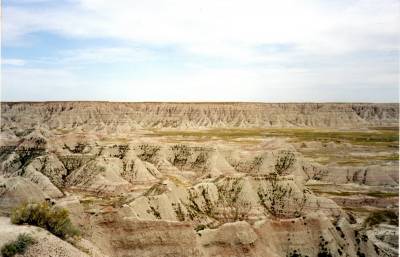 Tweet
Recent Comments
Katherine Gregor
"Today we have lost the knack for symbols. The power of symbols has gone missing, faded to names, phantoms not flares. The mass of... Read More
Saturday, 11 April 2015 18:48
Rosy Cole
'We never knew the wasteland would be beautiful.' But it is...because we know (subliminally) that it has the potential to 'blosso... Read More
Sunday, 12 April 2015 12:36
1308 Hits
2 Comments

I have been thinking today about two words, 'complicated' and 'complex', and wondering what the different usage is or should be. They have slightly different Latin roots: complexus, meaning surrounding or encompassing and complicatus meaning folded together or confused (thank you www.etymonline.com).

Well, that wasn't so complex after all.

My breakfast reading lately is not a newspaper, which I only get on the weekends, but Plutarch's Lives, which I have never read before. I try to get through a few pages every day. This morning I read this in his Life of Demosthenes:

"it was not so much by the knowledge of words that I came to the understanding of things, as by my experience of things I was enabled to follow the meaning of words."

It isn't grief that leaves you.

It is the memory of grief.