In honor of William Faulkner's birthday, here is the first line of Absalom Absalom:

From a little after two o'clock until almost sundown of the long still hot weary dead September afternoon they sat in what Miss Coldfield still called the office because her father had called it that – a dim hot airless room with the blinds all closed and fastened for forty-three summers because when she was a girl someone had believed that sight and moving air carried heat and that dark was always cooler, and which (as the sun shone fuller and fuller on that side of the house) became latticed with yellow slashes full of dust motes which Quentin thought of as being flecks of the dead old dried paint itself blown inward from the scaling blinds as wind might have blown them.

and a link to his Nobel prize speech:

Tweet
Recent Comments
Rosy Cole
The Sound and the Fury has been on my shelf for three decades or more, but I've never got round to reading it, or any of Faulkner'... Read More
Friday, 26 September 2014 15:41
Stephen Evans
Faulkner is a taste not easily acquired; the prose is only difficult at first, though some of his shorter novels such as The Old M... Read More
Friday, 26 September 2014 19:06
1085 Hits
2 Comments

My mother collected angels. She found and brought them home from all over. Now that she has passed, I have been trying to decide what to do with them. 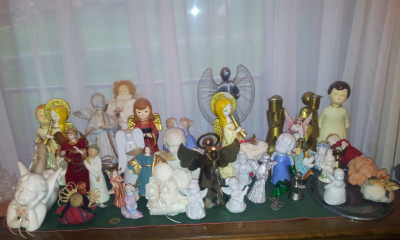 Some at least I will keep: the brass candle holders she bought in Mexico, and definitely the musical one that chimes Hark the Herald Angels Sing when you wind it.

I was not healthy as a child, asthma that kept me indoors for weeks, whole months of school missed, severe bouts of pneumonia. During these, according to my father, there were times when he did not think I would make it. I don’t remember that.

But I do remember my mother sitting with me through the night, night after night, as I struggled  to breathe, vaporizer on full blast, cooling my fever and reading to me to keep me calm and entertained. Most clearly I remember her reading Winnie the Pooh and The House at Pooh Corner, doing all the voices perfectly: sincere Pooh, gloomy Eeyore, frantic Piglet, confident Owl, and a Christopher Robin that sounded a bit like me. I still hear her voice when I read them. And I still read them to hear her voice.

So some of the angels I think I will let go, in the hope that they may carry into the world the gifts that she gave me. The gift of presence. The gift of care. The gift of example. The gift of knowing every day that you are loved. If anyone can carry these gifts, it will be my mother’s angels.

By greatest, I suppose I mean the highest achievement in both imaginative scope and literary execution. If you prefer, you could replace the word greatest with favorite and you would still be accurate.

Here are my choices:

The End of Eternity  – Isaac Azimov

Note: I have included only books I have read (usually many times). I have arbitrarily excluded such excellent series as the Lensman series by E.E. Doc Smith, the Foundation series by Isaac Asimov, and the Space Trilogy by C. S. Lewis, though I have included the first book of the Riverworld series because I feel it can stand alone. I have also excluded excellent novels that I consider primarily social critiques such as Slaughterhouse-5, 1984,  Fahrenheit 451, A Clockwork Orange, and books I considered primarily fantasy. I have also generally excluded linked stories – though you could argue both City and Childhood’s End would qualify (I don’t).

So that's my list. What's yours? If you don't have one, this may be a good place to start exploring.

Doubt not, O poet, but persist. Say, 'It is in me, and shall out.' Stand there, baulked and dumb, stuttering and stammering, hissed and hooted, stand and strive, until, at last, rage draw out of thee that dream-power which every night shows thee is thine own; a power transcending all limit and privacy, and by virtue of which a man is the conductor of the whole river of electricity. Nothing walks, or creeps, or grows, or exists, which must not in turn arise and walk before him as exponent of his meaning. Comes he to that power, his genius is no longer exhaustible.