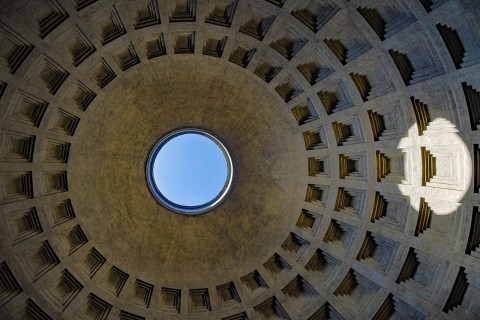 Suppose some day, some later time, I stand

In the eternal Roma, beneath, you know,

The Parthenon. No. Get it right. No.

The other one. The. Palladium. No. No.

Beneath the Pantheon I shall stand, gazing

At the gods and goddesses. (Are they

Still there? I believe they are.) And stand

Gazing. How will I feel? In that ancient

place? Amongst that Pantheon of old.

They return my gaze with timeless eye.

A Few Random Thoughts During the Holiday Season...

...that don't particularly have anything to do with the Holidays. Or, perhaps more correctly, Holidaze.

Do you remember the signs in practically every car on the road - or so it seemed- that read BABY ON BOARD? What? Like it's okay to hit a car with GROWN-UPS ON BOARD?  Adults don't count? Please don't hit this car because it has a baby in it whose life is obviously more precious than yours. Perhaps that was closer to the beginning of all of this "Politically Correct" nonsense that has gone so far that we are losing our Freedom of Speech. But I digress.

The Holidays are For The Children.  Well, adults appreciate being thought of as well.  However, considering the economy we'd be better off going back to basics and making something if we can. I'm perfectly satisfied with an e-card. Just knowing someone has thought of me long enough to send one of those makes me happy. I'm not forgotten. As writers we live a pretty solitary life. As a single writer, mine is particularly solitary. My cat is a Chartreux.

She has a silent meow. As a migraineur, I appreciate that. It would be nice, however, if through some flight of fancy, she could say something, preferably in English, every now and then.

The thing that has been really irritating me (you knew I'd get to it, didn't you?) is Make a Wish. Before you start screaming at me for being mean or cruel, please hear me out. Have you ever heard of Make a Wish for Grown-ups? No?  Of course not. That's because there isn't one. My question is: why not? Do only children who are fatally ill deserve to have a wish fulfilled? Do people who have lived longer and had a difficult life not deserve to have a wish fulfilled?

I remember interviewing Tony Bennett many years ago. Some interviews stay with you. At one point, while discussing why he gives everything to each performance, and his performances are long, he told me he just wants to bring some happiness to people, an escape for a little while. He said some people are born under a lucky star, and some people, dammit, no matter how hard they work, nothing goes right. He has not forgotten those people. Apparently, everyone else has. If you've seen someone struggle with cancer, you know how debilitating it is, how barbaric the treatment. Some people have worked hard all their life, can't really afford to retire and haven't even taken a vacation, and then they're hit with a debilitating or fatal illness. What about them? Are they like the ones who aren't a BABY ON BOARD? They've lived "x" number of years, therefore no one needs to think of them, they've had their chance.

How many people have friends drift away when they're ill because it has gone on too long. I have had, and still have, many friends with chronic, but invisible, disabilities. One had a "close friend" tell her that she was lying when she was too sick to go out for dinner. I pointed out that she wasn't a real friend. This is the time of year when people are alone.  Some are healthy enough to go and help others, to be with friends. Others are incapacitated and completely alone. What of them?

What of older people? They have so much to share but people shy away from them. They have feelings. They still want to see people, have conversations, travel. They're not dead. Why can't people stop treating them as if they were?

I have no answers. Just questions and some food for thought for anyone who is reading this.

Tags:
friends Baby On Board Make A Wish caring age

Not that anyone is counting; my age just came to mind.

Having my beer, my thoughts started to wander off.

Young girls like to say, “I’m fifteen and a half.”

That matters considering that turning sixteen is a big deal.

Ripe for a license application!

What’s the big deal if I said I’m fifty and a half?

I have everything, well, almost everything a young girl dreams of right?

At fifty, there craving for things differs.

Assuming that one has had a good journey turning fifty, of course!

So I’m turning fifty-one and I’m very grateful for what I have accomplished.

I gave up good opportunities for even better ones!

I’ve slowed my pace down so I can live my moments better.

I don’t really pine for anything more except to have a healthy life.

Growing old, things start to give.

Like the blender in the kitchen that suddenly won’t work.

Or the washing machine that’s beginning to sound funny.

Growing old, I’m a little more careful about myself.

I avoid jumping out of bed!

And I certainly try to remember things.

I have to admit; my mind sometimes forgets names.

I’m not sure if that’s because I’m fifty and three-fourths.

Or simply because I have too many things in mind.

Whatever the reason, I try to keep my mind active and well oiled.

So it really is no big deal turning fifty-one.

I think it’s a bigger deal when one says, “fifty nine and a half.”

Fifty-three and two thirds or fifty-six and one fourth?

Happy to Be Home from the Hospital