The Butterfly and the Bee 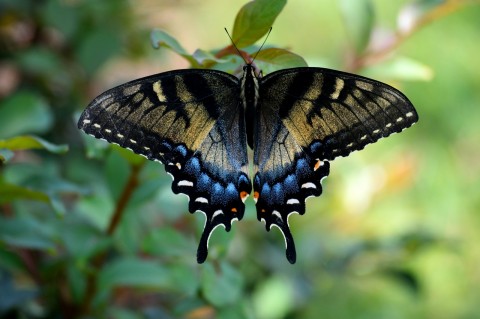 As we all know, I have a low threshold of fascination. Today for example as I have been working on a book, I have also been keeping an eye on my petunias. I have never had petunias before, so perhaps that accounts for some of the fascination.  But really what garnered my attention for the last few hours is two visitors: a butterfly and an bee.

Initially actually I was watching a pail of water. It’s very hot today and I had set out what I hoped would be a makeshift birdbath. As I watched the pail, the water looked still and undisturbed. But the bright sun threw a reflection of the water onto the roof of my porch. In the reflection I could see the water moving, from the wind or maybe convection currents as the water heated in the brutal daylight. The reflection also showed the rippling waves as my gift evaporated. I felt like I  had my own little Plato’s cave, except the reflection was truer than the actual. Though I suspect that was true of Plato's as well.

But then the butterfly appeared, a large one, likely a swallowtail  (my older brother would know), black wings with blue and gold spots. She (I think) kept flying around the weeds in my little garden. I have weeds in my garden, a lot of them this year. I leave them there because I don’t hurt anything if I don’t have to and they seem to feel the same. Anyway, the butterfly kept landing on one after another of the weeds, continually disappointed I assume, and completely ignorant of the cornucopia of petunias in the hanging basket not five feet overhead. Every once in a while she would float up and I would think—there, now she’s finally got it! But, so far at least, she has not made the leap. Perhaps it was an aesthetic choice and green is her preference. But the purple and pink treasure remained unclaimed. By the butterfly anyway.

The bee came later. A tiny one—though as scarce as bees have become around here I was glad to see any—found the petunias. But instead of gorging on the large full flowers, he instead insisted on trying to make his way into the nearly closed nearly dead blossoms, skipping entirely the glorious siblings. I watched him disappear into the narrow passage, and could see the from the turbulence outside the tunnel how difficult his passage was. I don’t if he made all the way it in, nor what he found when he got there. Maybe he just wanted a challenge. Or maybe the ripened juice is sweeter. Perhaps the bee knew his business better than I.

There are many morals that could be drawn here. But I will leave it to you, and the butterfly, and the bee. My wish is simply this: May you be  fascinated by flowers.

(Image by Paul Brennan from Pixabay )

Nicholas Mackey
A life in trees
The other evening, my wife and I went for a stroll along the Thames Path  not far from London's Chelsea Harbour and stopped to sit awhile in a  deligh...
1 comment
Read More

Rosy Cole Expectations
02 August 2020
You have vividly highlighted the dangers of automatic expectation which can so rapidly morph into a ...

Stephen Evans A Good Book
17 July 2020
Genius sets its own terms But I agree density of expression was not his gift. Though compression o...