About two years ago Rosenblum started an online dating service, lately she was sued by one of her former clients. He was one of her VIP clients who paid a large sum of money so that she personally would find him a suitable partner.  Apparently she failed to do so. Rosenblum ignored questions about the lawsuit, instead she used the opportunity to promote her business. She encouraged older men to subscribe, even free of charge, to her dating service and gave older women some personal grooming tips

Rosenblum claimed that older women should be careful not to let themselves go, eligible men are rare, and in order to catch a man, women must stay slim and beautiful. 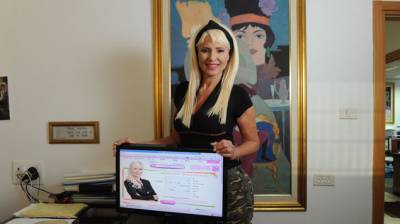 In the photo Pnina Rosenblum and her new site