I don’t know how my mother came to choose the little blue house at 7 Bowie Court. But in choosing it, she changed her life, and the lives of her children.

From 1957 to 1967, we lived in that house. The Copelands were next door at 5 Bowie Court. And unlike the other houses in the court, our front doors faced each other. That access and proximity facilitated a friendship between my mother and Mrs. Copeland that lasted almost 60 years, a relationship that continued and even grew in closeness after we moved across town. As I grew up, and after, they taught me what friendship meant.

Somehow, despite (or because of?) raising seven boys between them, they seemed constant companions. This included 20 plus years or so swimming in the mornings at the Rockville Pool and 35 years of Meals in Wheels (my Mom driving, Mrs. Copeland delivering). 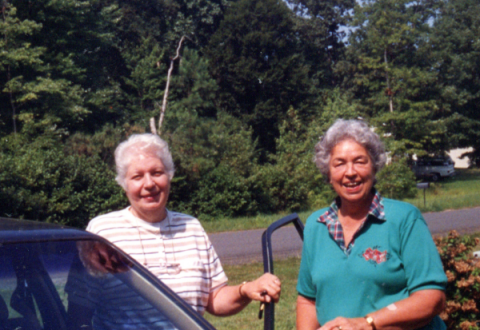 My mother (on the left in the photo) loved to drive and Mrs. Copeland loved to explore, and they took countless trips together, usually just afternoon drives out into the country (there was country then) or up to Westminster for tea. One very special trip they both talked about for years after: down to Asheville North Carolina and over the mountains to Gatlinburg Tennessee. It was one of the things that my mother remembered longest.

Mrs. Copeland (I never could call her Ann) loved music and the arts, and had a fine soprano voice. She would frequently accompany my parents to my performances in Annapolis or elsewhere, and was well known to my performing friends. She had a discerning ear, but was effusive with her praise. When I turned to writing, she was just as supportive. And with her generous heart and love of arts and beauty, she was a continuing inspiration.

After Mom died, Mrs. Copeland would continue to call us, always apologizing for not calling sooner, asking how we were, deflecting our questions about her health, encouraging me to write, and always with the spirit and warmth and humor we had known all our lives. We have now lost a cherished presence, and a link to our past. But for me, the memory and lessons of their friendship will not fade before I do.

A Few Random Thoughts During the Holiday Season...

...that don't particularly have anything to do with the Holidays. Or, perhaps more correctly, Holidaze.

Do you remember the signs in practically every car on the road - or so it seemed- that read BABY ON BOARD? What? Like it's okay to hit a car with GROWN-UPS ON BOARD?  Adults don't count? Please don't hit this car because it has a baby in it whose life is obviously more precious than yours. Perhaps that was closer to the beginning of all of this "Politically Correct" nonsense that has gone so far that we are losing our Freedom of Speech. But I digress.

The Holidays are For The Children.  Well, adults appreciate being thought of as well.  However, considering the economy we'd be better off going back to basics and making something if we can. I'm perfectly satisfied with an e-card. Just knowing someone has thought of me long enough to send one of those makes me happy. I'm not forgotten. As writers we live a pretty solitary life. As a single writer, mine is particularly solitary. My cat is a Chartreux.

She has a silent meow. As a migraineur, I appreciate that. It would be nice, however, if through some flight of fancy, she could say something, preferably in English, every now and then.

The thing that has been really irritating me (you knew I'd get to it, didn't you?) is Make a Wish. Before you start screaming at me for being mean or cruel, please hear me out. Have you ever heard of Make a Wish for Grown-ups? No?  Of course not. That's because there isn't one. My question is: why not? Do only children who are fatally ill deserve to have a wish fulfilled? Do people who have lived longer and had a difficult life not deserve to have a wish fulfilled?

I remember interviewing Tony Bennett many years ago. Some interviews stay with you. At one point, while discussing why he gives everything to each performance, and his performances are long, he told me he just wants to bring some happiness to people, an escape for a little while. He said some people are born under a lucky star, and some people, dammit, no matter how hard they work, nothing goes right. He has not forgotten those people. Apparently, everyone else has. If you've seen someone struggle with cancer, you know how debilitating it is, how barbaric the treatment. Some people have worked hard all their life, can't really afford to retire and haven't even taken a vacation, and then they're hit with a debilitating or fatal illness. What about them? Are they like the ones who aren't a BABY ON BOARD? They've lived "x" number of years, therefore no one needs to think of them, they've had their chance.

How many people have friends drift away when they're ill because it has gone on too long. I have had, and still have, many friends with chronic, but invisible, disabilities. One had a "close friend" tell her that she was lying when she was too sick to go out for dinner. I pointed out that she wasn't a real friend. This is the time of year when people are alone.  Some are healthy enough to go and help others, to be with friends. Others are incapacitated and completely alone. What of them?

What of older people? They have so much to share but people shy away from them. They have feelings. They still want to see people, have conversations, travel. They're not dead. Why can't people stop treating them as if they were?

I have no answers. Just questions and some food for thought for anyone who is reading this.

Tags:
friends Baby On Board Make A Wish caring age

A Friend In Need: Cancer And The Vanishing Friends

A short paragraph from the essay “Living With Cancer: Alone And Ghosted” by Susan Gubar (NYT August 6th), made me think about our expectations from friends:

“I depend on a circle of wonderful friends to whom I am enormously grateful. Quite a few gratify me with their company or by going on urgent errands; however, I have been shocked by several who have simply vanished. Perhaps my needs seem too pressing or never ending. Maybe these people feel inadequate, frightened or taken up with their own affairs. As troubles mount, will supporters dwindle?”

Gubar’s experience with her friends is similar to mine. When my husband became ill, many friends phoned to see how we were and  offered to help. They came to visit, and thought of creative ways to make our life more comfortable. For example, some colleagues from the university took him to sit by the sea. My husband enjoyed it all: being an introvert, he wasn’t used to being the center of attention, and often said that he was thankful that cancer made it possible for him to realize that he was loved by his friends. 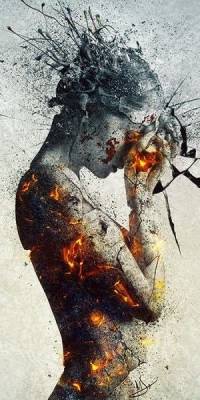 Scurrying to hide and go, and move and do, flying and jumping in erratic motion of crazy ... manic minions fighting for attention like spoilt children vying for the last sweet on Earth without knowing where it is.

They clash and scrap within a mess of scattered matter, bullying if they must in their desperation for validation and prime position. The frenzy becomes a bubbling cauldron of emotional prod and pull, too big for the heart to contain. It erupts, overflowing to the brain.

That’s when true plumbing havoc begins with blockages of activated sludge and leaks into cracks of permeability. Crusts of tar form to smother reason and logic, fear grips to suffocate what’s right and best and nurture the growth of trepidation and uncertainty. Manic minions have now become tribes of egos that squabble amongst their own.

A stroke of unexpected softness from innocence, a touch that says, ‘It’s okay.’ The stroke becomes a hold that stops your breath and grounds you to the earth in shuddering reality, sending those manic minions scurrying.

Their withdrawal is short-lived however, and those minions return revived and more frenzied than ever. But you’ve had a glimpse now, a reminder from your heart.

The minions come and go, like and dislike, take a sneaky peak. They want but don’t know how to want and send mixed up messages. They’re greedy and self-satisfying with egos that thump and demand.

Each minion has its own agenda that changes by the minute, sometimes repeating to never end or begin, as the chicken and the egg. All are urgent, yesterday urgent ... the wheel spins faster and faster until a centrifugal force kicks in.

Then, in the momentary flick of a switch, everything stops. Everything falls to nowhere.

A life is gone.

All that remains are memories and grief, and people with minions yesterday, bound together today. Nothing is the same again. What mattered yesterday, matters nix today.

Instead, spending an hour having dinner together, savouring the conversation more than the food, takes centre stage. And when that stage moves to the kitchen to clean those dishes, the chatter moves with it, as an oozing luscious centre from a warm chocolate pudding. Yesterday’s minions are floundering as they wash down the eternal emotional drain, until the minions are gone.