When we were in Rome, a couple of weeks ago, I insisted we go and see "my favourite church in Rome".  The first church I ever liked, to which I owe my introduction to, and love for, early sacred music.

It was all because I was a teenager with a crush.

I was sixteen and attending the French Lycée Chateaubriand in Rome.  In the morning, I'd leave home earlier than I needed to, in order to reach the Aventino, where my French soon-to-be first boyfriend and his family lived, and, with some luck, "happen" to find myself on the same bus as he.  This required major planning with the help of maps, bus time tables, and psychic abilities to be able to predict when the Rome buses would actually be running.

That morning, through over-eager miscalculation, I arrived on the Aventino nearly an hour before I'd expected to.  The winter morning daylight had barely broken, and not wanting to loiter in the street, in the cold, I walked into a church.  Santa Sabina.

I'd never seen a church like this before.  From an early age, I had been both drawn to and frightened by churches.  I'd always found something unnerving and menacing about High Baroque Roman churches.  As a child, I couldn't find the right words to articulate what it was, exactly.  Now, I realise it evoked for me something deeply powerful and unforgiving. 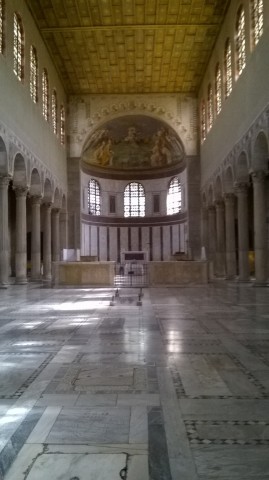 Santa Sabina was different.  An open, wide nave with two rows of plain stone pillars, and no seats for the congregation.  Further down, before the altar, a separate, secluded area where, I guessed, there were a few seats, although from where I stood, hidden behind the first pillar, I couldn't see who was there.  But I could certainly hear them.  A regular, repetitive, lulling chant by male voices.  Gregorian chant, although I didn't know that's what it was called, then.  Nor did I know that Santa Sabina was a 5th Century church, and that the singers were Dominican monks.  All I knew was that, for the first time, I was in a church that I not only found far from menacing, but positively inspiring in a way I'd never known a church to be.  I felt a strong pull, a deep sense of longing, like the yearning to come home.  So new and yet so familiar.

I was mesmerised by the regular, even chanting.  It wasn't imposing, like the great masses in the large basilicas.  It was deeply comforting.  A balm for my anxious soul.  I listened, entranced, leaning against the quietly strong, gently reassuring stone pillar.  I wanted to stay there for ever.

After that day, and even when, a few months later, I started going out with my French boyfriend, I would often leave home early, just so I could go and stand in Santa Sabina, behind the pillar, for a few minutes, and immerse myself into that dimension of peace created by the ethereal, and at the same time comfortingly grounding, music.