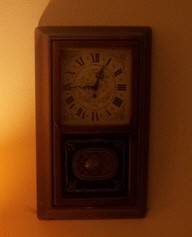 We stopped the clock a week ago

while my brother slept on the couch.

The ticking kept him up.

But I can’t hear it.

Friends have come and gone.

but we have lots of food.

I wish to remember

but it turns me sad

and I have work to do.

Here is my dream:

on a frozen lake.

If it melts I drown.

If not I skate forever

For what should I wish?

Our Green Room friend Charlie Killleen posted a powerful essay about self awareness   http://gr8word.com/index.php/entry/visit-to-a-shrink-31-january-2003. In it he asks " who needs be to told he's grieving?" I feel that many of us do need to be told. Surprisingly grieving is often perceived as self indulgence: strong people just get on with it. Here is my essay about  similar sentiments:

In the first year of my widowhood I sought solace in the company of other women in the same circumstances as mine. Being confused and overwhelmed, I felt  that if I spent enough time with experienced widows, I could learn from them how to cope. Perhaps I was also hoping to skip some of the steps of mourning, and to expedite the healing process.

So I contacted a woman, whose husband died the previous year, I had met her before at social gatherings since her late husband was a colleague of my husband. We liked each other, had a lot in common, and as we were both lonely, we became fast friends. It was comforting to spend time together: we took long walks along the sea, went to concerts, and couple of times even drove out of town for the whole day.

Then all of a sudden, without warning, she ended our friendship. She claimed that there were other obligations and that she was too busy and had no time to meet up. I didn’t understand what was wrong, and wondered if it was something that I had said or done. I wrote her a letter and apologized, in case I had hurt her feelings without noticing. She replied that it wasn't my fault, but never made alternative plans to meet or expressed any wish to see me again.

Not long ago I heard on This American Life that “public mourning is naked.” I don’t remember the context, but I found those words so moving that I recorded them in my notebook, and wrote underneath: desperation, neediness, empathy.

In Biblical times the words "naked" and "public mourning" were connected, and had a physical/literal meaning. At that time tearing one’s clothing, especially in front of a crowd, was the custom of the land,  and  it was a powerful expression of pain and sorrow: Job 1: 20

“Then Job arose, and tore his robe, and shaved his head, and fell down on the ground, and worshiped.” (World English Bible)

Tearing the robe and shaving the hair were outward (public) signs of grief. Originally, people would rip their garments as soon as they heard the sad news. The mourner tore  his clothing until he exposed his heart.

In a more figurative sense,  these words paint a picture of deep sorrow. In displaying grief I expose my heart. Being naked also  means that the masks have been removed, leaving me unprotected, vulnerable and at risk. Expressing raw emotions (or as the idiom goes: wearing my heart on my sleeve) is probably too uncomfortable, and embarrassing, for those around me. Therefore, and since public mourning is no longer in fashion, it is probably prudent to do it quietly and privately.

It has been almost seven years, and I was fortunate  to find other women friends (not only widows), with whom I share my feelings. But every once and a while I think about that friend and the time we spent together. I don't blame her, after all her husband died only a year earlier, and she had her own mourning to deal with. I still don't understand why she stopped being my friend, but when I heard the statement: “public mourning is naked” I realized that this was part of the answer: it was probably the nakedness of my grief which felt too close and scared my friend away.