A Recipe for Comfort

The Christmas mug with the nearly faded snow man.

A splash of milk.

A teaspoon of superfine granulated sugar. 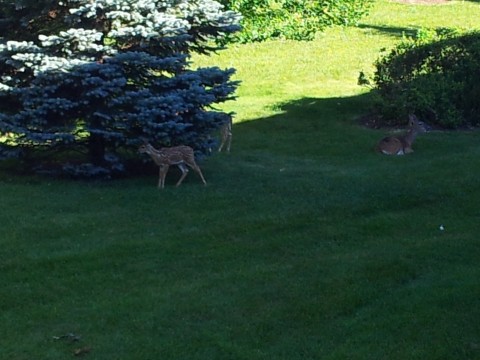 I was sitting outside on my porch today reading for a few hours. All during that time birds came visiting. First there was a beautiful jay, stunning blue and quiet for once, nestled into a spot in the sun just a few feet away. Then a robin. Then a few grosbeaks. Some sparrows. Dad’s favorite wren who lives in the azalea next door. A woodpecker on the nearby tree. Others I couldn’t name. And now there is a doe settled in the shadowed grass about 100 feet away, testing the breeze, with a young buck standing close. Just living. All just living.

Why can’t every place be this peaceful?

Little Salam or Who Is Afraid of Peace

At a playground in West Philadelphia, my granddaughter Leora played with another little girl, her name was Salam. She spoke to her father in English (with an American accent) and he answered with a strong foreign accent. My first reaction, upon hearing the little girl’s name, was “what a lovely name.” Then I started thinking about our area and about peace.

Until recently I didn’t realize that peace has suffered such an enormous fall from grace. But first came the day of the Israeli elections on March 17th, 2015 when the candidate Bibi Netanyahu forgot that he was also the nation's prime minister and warned "his" supporters against fellow citizens: the Israeli/Arab voters. Then last October, the same Prime Minister announced at a Foreign Affairs and Defense Committee Meeting that "we will forever live by the sword.”

it has become clear that peace is no longer relevant, and every time we say "Shalom" we don't mean it. Even worse, from what I see peace has turned into a cynical political word. For example, in response to an essay about Women Wage Peace, which I had written and posted on Facebook I received quite a few disturbing comments.

In that essay, I stressed the fact that since its inception in 2014, shortly after the end of Operation Protective Edge, Women Wage Peace has insisted that it did not wish to identify with any political party. It started as a grassroots movement which aimed to gather under its umbrella as many women as possible, and it has purposely remained within the consensus focusing only on universal, seemingly non controversial, values. It should have worked: is there a woman who’d admit that she doesn’t want peace?

It didn't: in response, one woman whose profile photos featured her with a smiling baby, argued that “wishing for peace (shalom) has become just a way of laundering words.” She also insisted several times  that “to say here (in Israel) that peace is not a political matter is either stupid or ignorant.”

It is disheartening that so many people here are willing to give up on peace and are even afraid of it.  However, it is scary that young women, and mothers, are resigned to a  future in which their children would have to live on their swords as well.

Several members of a Religious Feminists  group wrote that a post about peace and women should  be removed. It seems that in today’s political climate it is wise for Women Wage Peace to erase  the objectionable first word from its name and to get rid of the third. For the time being it can l keep the word “Wage.”

I wonder how many Israeli or Palestinian babies who are born today are given the name Salam/Shalom. But at least I could always find solace in the fact that across the Atlantic ocean in the largest democracy in the world  little Salam still plays with my Israeli granddaughter.

P.S I checked and "peace"  is not one of the key words that the Times Of Israel provides for its  bloggers.

Israel Conference On Peace and The Missing Parents

Israel Conference On Peace last Thursday brought together an impressive roster of speakers, whose opinions matter. There were Israelis and Palestinians, representatives from the left and from the right and even several statesmen like Tony Blair and Martin Indyk who are involved in the peace “industry”. They all spoke to a full house that was waiting for some encouraging message of hope.

Still if we need a proof that the Israeli left is out of touch with the life of most Israelis, we could start with the location of the conference and the price of registration.

The conference was held at a luxurious hotel in Tel Aviv.