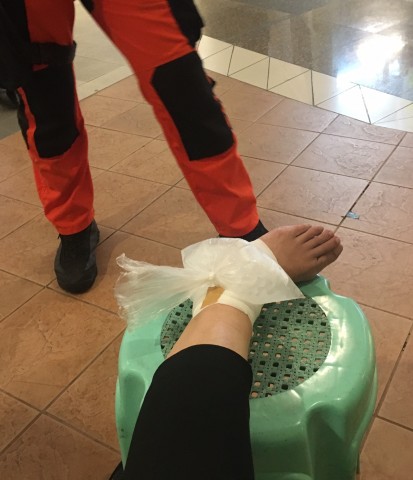 My sister and l live in opposite sides of the world.

Despite distance the frequency of our radars have managed to stay clear.

We have an unusual connection thru parallel journeys and mental telepathy.

Months go by without communication yet when distress calls our signals automatically connect.

Just the other day while walking at the mall I missed a step and fell to the ground.

I twisted my ankle badly and it took me a while to get back to my senses.

Moments later I receive a message from my sister saying that she had fallen too.

She had just arrived at the emergency room while I had just gotten home.

How odd?! I thought to myself.

After a few exchanges I realized that we both fell at the exact same time!

I am in awe at the synchronicity and parallelism of it all.

I am sure that like myself she began to contemplate on the deeper meaning.

A fall of sorts somehow always jolts me back to my senses.

It’s like the Universe telling me, “get back to your center.”

If truth be told, I have been going through a lot of transitions lately.

My mind has been overthinking and at times I’d be running on adrenalin.

That sudden fall broke the cycle of over extending myself.

I believe the same for my sister as well.

She and I have been going through major changes in our journeys.

I am home alone for the next 3 days with my foot elevated.

I admit that it’s hard to stay put physically and mentally.

However, I have to believe that it is necessary therefore, trust is the process.

Just as anyone would take caution before taking a big turn while driving.

I am once again humbled and reminded to take a few steps back and reflect.

For I know that something big is about to unravel as I take that turn.

I see the light from a distance and maybe I am cautioned not to rush.

Rather, to pace myself and walk mindfully as I continue to mend my way back.

In HIS Image and Likeness

My father was a very good provider while we were growing up.

He made sure there was more than enough to meet everyone’s material needs.

Up until college, we were all educated in the best schools.

In marriage, he provided each and everyone of us with a home to live in.

I do not recall any of my material needs ever compromised due of his lack of providing.

My father is now 90 and to this day I live a very comfortable life because of him.

I am eternally grateful.

This is the image and likeness of goodness and generosity I grew up with.

It took me a while to understand my mother’s angst.

I often wondered where her unhappiness stemmed from.

My father was a hard worker and a dedicated provider.

As a child I understood that was all it took to be a good man.

I could not see my mother’s loneliness.

She craved for nurturing and conversation.

She wanted so desperately to have rapport with someone.

My mother was desperately lonely.

She took very good care of us and the home but she was all alone in her marriage.

I, unfortunately did not fare well in my own marriage.

I guess I didn’t have the right role models to look up to.

No regrets, no blame, just stating a fact of realization.

I have come to realize that HE too is the likeness and image of my father.

HE came into my life with a grand and generous plan.

A material plan that consisted of a home and all the comforts money could buy.

Naturally, I thought I had won the lottery and love was on my side.

Until the cracks began to show.

The initial rapport turned into silence.

One day out of the blue, it just became less and less.

HIS presence faded so quickly, the only thing lacking was an obituary.

One moment HE saved my day and the next HE was absent.

Not gone, just not available.

Still I loved HIM like I love my father.

I was in awe with HIS generosity of wealth because growing up it was my security.

HE no doubt, would have provided the best for my girls too.

But I think in the end, I too would have become a spitting image and likeness of my mother.

Lonely and alone in a home filled with material possessions.

From Merriam-Webster, the simple definition states:  the quality of being honest and fair.  The state of being complete and whole.

The full definition states:  Firm adherence to a code of especially moral or artistic values, incorruptibility.  An unimpaired condition, soundness.  The quality or state of being complete or undivided.

Hmmm. All I know is that I was and am not and will never suffer or give up my integrity for anything or anyone.

Without question, my integrity cannot be sacrificed.  I am unable to perform optimally if otherwise.

As I share my story… the first comment that usually comes out is… “you would have eventually left as you are not the type to compromise on your integrity.”

Yes, absolutely right!  No matter the cost or how painful, my integrity is non-negotiable.

I told a friend today, “I hope that the next time… I will be able to see clearer and sense better …”

Forgiveness without a question and answer portion is not easy.

To forgive another person’s silence is doubly hard.

The hardest for me is forgiving myself.

There was no reason to doubt.

I truly believed all the signs that manifested in my favor.

I sat in silence and prayed.

And when God answered fairly quick, there was no need to second guess.

I overlooked a fine line in my prayer.

I trusted the process.

My excitement took the better off me.

I lost my balance, my self-worth, my integrity and my dignity.

Much as I would have desired to save a good cause.

I guess my cause wasn’t good enough and worth saving.

In the end, I only had myself to forgive.

A humbling journey that awakened me.

Slowly but surely the wounds are healing.

As I begin to put myself out in open space once again,

I trust and I keep the faith.

After all, vulnerability must come with forgiveness.