Whimsies section of The Twain Poems of Earth and Ether 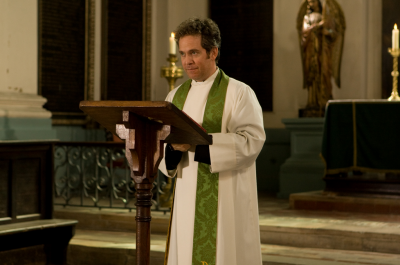 One of the ongoing and little appreciated consequences of Henry VIII's defiance of the Pope and his break with wealthy Catholicism, means that Protestants have inherited responsibility for the upkeep of England's heritage churches which, despite some governmental assistance, can be a millstone. Thankfully they were built for the greater glory of God, and to last, but week to week upkeep can run into thousands of pounds. This fun poem concerning one zealous priest was written with affection several years ago. I'm sure readers will recognise the inimitable Tom Hollander in the images in his role as Rev.

Zeal for your house consumes me. Psalm 69:9

We’re looking on the bright side

That’s where we cast our net

It’s what the vicar tells us

Will get him out of debt

The choir’s in perfect harmony

But if coffers are not rustling

There’s no joy to be found

We’ve given in our widow’s mite

But still it’s not enough

Donations should be paper

Any other kind is duff

So forget about the small change

Dig deep in purse and pocket

If the tax-man doesn’t take it

The vicar’s sure to dock it!

Now those who’ve sung at weddings

Will know the cleric’s drill

He tells of crumbling plaster

And windows that need masons

Without a calm restraining hand

He’d be passing round large basins!

Some think an entrance turnstile

Would be a good idea

The takings would flow freely

And add up year by year

Such measures smack of mammon

And leave the punter skint

We should just install a Mint!

So render unto Osborne

The sums that must be found

And pray our Talents work for good

Unburied in the ground

With Faith and Hope and Charity

Investment’s sure to double

But those who gather into banks

Heap up a hoard of trouble

You can’t fault the Rev's intentions

His heart’s for God and Church

Without his glorious vision

We’d all be in the lurch

And shepherd of the flock

He keeps a strength of purpose

To make sure we build on rock.

So we’re looking on the bright side

We’re hauling in our catch

The nets are fairly breaking

And debt we can despatch

Who want their sins forgiven

Can join with us who bless him

And have their Hope in Heaven! 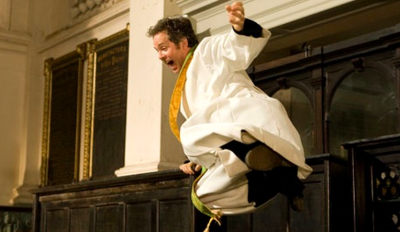