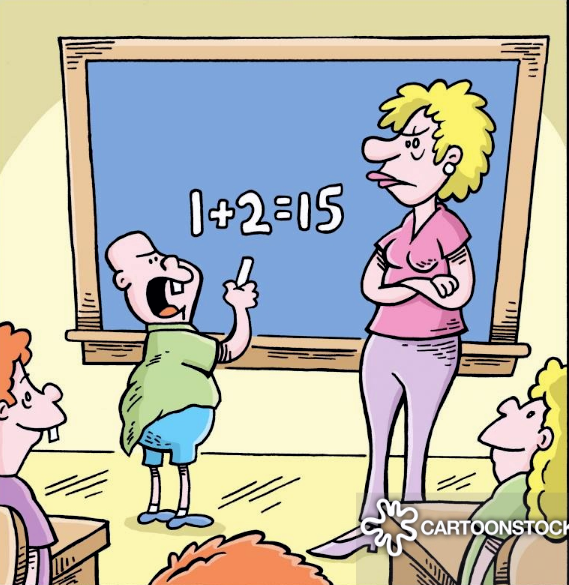 "What do you mean, it's wrong? In ethics we learned that the truth is always subjective!"

There can be no doubt that the teaching of correct written English has never been for the faint-hearted. So much so that the forensic parsing of paragraphs, once key to a grasp of the nuts and bolts of structure, has been abandoned in favour of an approach that appeals to mystified students. ('Syntax', if mentioned, means confiscation of your iphone for Instagramming during lessons, or swearing the dog wolfed your homework three nights in a row, else being despatched to 'iso' for testing the resilience of technology hardware.)

Beleaguered teacher, reaching for a one-size-fits-all solution: Remember, if it sounds right, it likely will be right!

Surely somebody, in the course of the lady's schooling, should of pointed out this is horse feather's and as such, obvs, its defo not on? Nor is the absence of full stops exceptable, irregardless of the need for fluency and spontaneity. Your asking the class to believe that King Charles I walked to the Whitehall scaffold twenty minutes after his head was severed. It puts Goves meddling in the shade, while the bloopers of split infinitives and ending sentences with prepositions have long been out of court. Of course, theres little way of knowing where to put commas if you haven't tangled with adjectival and adverbial clauses.

It's no good blaming the teacher, though. Her's is an unenviable task and she probably didn't receive adequate tuition either. Plus, the possessive pronoun can sometimes seem a tad illogical.

Just because spurious expressions, misspellings, muddled concepts and random punctuation, or none, have passed into common usage, it doesn't make the situation okay. Too wrong's don't make a right. You know it! Daily, we're bombarded with words. Habits spread like an epidemic, even infecting those who know better.

Many argue that language is a living thing. It is evolutionary. But do we really want to deconstruct the enlightenment conferred by education and inspired achievement which are the foundations of a civilised society and have forged the better part of it? It's not about Me and My view of the world, it's about objective, consensual values and disciplines in the interests of everyone's wellbeing. How we regard language has a direct effect on behaviour. The hierarchy within it helps us form appropriate responses to any given set of circumstances. The choice to ignore it is, ultimately, a vote for anarchy.

We are at a pass where the world turns on hearsay.

People, this is no mere plea for shunning 'smoke and mirrors' jargon and the adoption of 'techspeak' where it doesn't apply. Such august authorities as Fowler, Strunk and White, Joseph Priestley, William Cobbett, not forgetting Dr Johnson, toiled tirelessly to prevent literary corruption, all with a view to clear communication at home and abroad and the democratic right to an education. Their design was to enhance culture, identity, and grant a voice in global affairs. Language is a means of breaking down complex and nuanced ideas, sensations, beliefs, into comprehensible chunks and stringing them together in a new pioneering way for the benefit of mankind. It's what creates cohesion between peoples. Even dialects are part and parcel of this, with their picturesque idioms that tell of historic experience.

We shall be back to cave-dwelling and monosyllables. Ug!