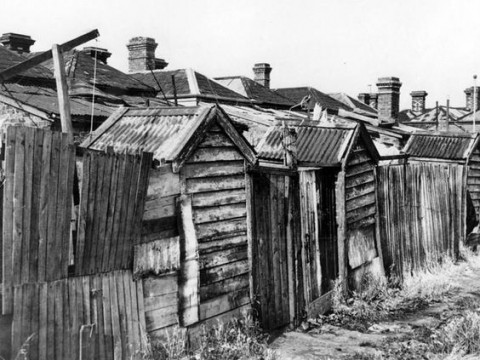 It’s hard to imagine that almost 130 years ago, Melbourne in Australia was considered the smelliest city in the world when today, it’s voted the world’s most liveable city.

The Melbourne and Metropolitan Board of Works was established in 1891 to manage Melbourne's sewage. Its crest bears the motto 'salas mea publica merces', meaning ‘public health is my reward’.

I think they call that transformation.

How fine this grand Dame of cities is, my Melbourne town. Yet such a past has she, before the first sewage flows from the All England Eleven Hotel in Port Melbourne traversed pastures of graded green at the Metropolitan Farm in 1897.

Ten years earlier, mortality rates from diphtheria and typhoid in our fair Melbourne town numbered 86.3 for every 100,000 inhabitants, compared with 16 in London and 66 in Paris. The idea to establish a Royal Commission to inquire and report on Melbourne’s sanitary condition was indeed, a splendid one. It came at the eleventh-hour when our fair city was gripped by demonic disease.

Very soon after, in 1891, the authoritative and very official Melbourne and Metropolitan Board of Works was formed. Their business was to provide water supply, sewerage and sewage treatment for our fair city.

Until that time, this admired Queen City of the South had a rather unsavoury means for disposing sewage.

All liquid waste, one day to become known as liquid gold, was thrown into the streets to mix as free as those on the recline of debauchery at Madame Brussels in Bourke Street. My Melbourne town had ‘borne testimony to her evil reputation among travellers as one of the unhealthiest cities in the world,’ according to a journalist of the time.

Strolling through streets and children playing outdoors meant an Irish jig within a cesspool of urine, night soil, kitchen and bath water, soap suds from washing clothes, drainage from stables and cow sheds, liquids from trades and manufacturers, and water running off rooves and overland. All would meet in open street channels made from stone, often running into earthen ditches as sluggish glob or collecting in pools that would flood and overflow in rain, giving it free reign to meander into waterways.

‘Tis no wonder typhoid and diphtheria proliferated. No adult or child was safe, even when many claimed it was purely in the slums. 'Twas an inclement falsity. From mine church cometh my dark demise.

[by an original in the Adelaide Observer]

"Those who know say that Port Said is the champion filthy city of the universe. If we are to believe Mr Cosmo Newbury, Melbourne, which claims to be 'the Queen City of the South,' is in a fair way to thrust Port Said from that eminence" - Register.

“Bill,' said I to my erratic Friend, who's travelled just a bit,

"Name the strongest aromatic City you have ever hit.”

Then he bowed his head in silence, And a study that was brown,

And - when out of reach of violence - Said "I name your Melbourne town!"

“William,” said I, “thou art witty with the music of thy mouth!

Knowest thou that glorious city is the Queen of all the South?"

"Yes," he answered; "well I know it! Heard it till mine ears do ache;

And, believe me, gentle poet Still in this she takes the cake!"

Then I asked a chewing Yankee, Lantern-jawed and most uncouth,

One of that cadaverous lanky Sort who always tells the truth.

Wal, Siree, he kinder reckoned Melbourne's people like to blow,

So he'd mark her down as second, Just to give Port Said a show.

Then I asked a dark Egyptian, Who had sojourned in the East,

Answering the true description Swathed in linen like a priest;

Rarer far, he said, and rankers than others Melbourne's ware

Ah, she had a lot to thank her stars for in the way of air!

Then a frugal child of China for an answer I cajole -

One of those who can combine a head and tail upon one poll;

One who'd found a way of making both ends meet.

And he says, with laughter shaking –

Then said I, the fates are in it! When will Melbourne's honours stop?

Others have no chance to win it, For she always comes out top!

Energy? She'd do without it! And ascribes it not to pluck!

This it is, and do not doubt it - Melbourne's wonderful for luck!

These reflections come from a PhD research that investigated abject communities relative to sewerage ghost towns. It focused on the Metropolitan Sewerage Farm community that grew soon after the Melbourne and Metropolitan Board of Works was founded in 1891 to treat Melbourne’s sewage at Werribee. As Melbourne grew, so did the work force required to manage the treatment of the sewage, and a community of workers and their families lived on site. The population peaked to over 500 in the 1950s. All but one family left the main township in 1973; the last family moved off site in the 1980s. The plant continues to treat Melbourne’s sewage and is now known as Melbourne Water’s Western Treatment Plant. The plant is about the size of Phillip Island in Victoria or the island of Mykonos in Greece.

For more information on the project, please visit https://www.facebook.com/MetropolitanSewerageFarm/

The Farm is a colloquial term for the Melbourne and Metropolitan Board of Works (MMBW) and now Melbourne Water’s Western Treatment Plant, currently treating nearly 60 percent of Melbourne’s sewage.

I had no idea Monika...We have transformed....

1 Cancel Reply
I had no idea Monika...We have transformed....
Cancel Update Comment

A wonderful testimony to hope, humanity and industry...

Fascinating to hear the way things have changed in our fair City!