I know Pat Montandon, a celebrated bestselling author of California and USA,a social worker, 'The Peace Messenger Award' winner and a very famous high society persona of her time, since 2008 via Red Room, a former writers' website. In these six years she has changed my life. She encouraged me to become a writer. She honed my skill by spending her valuable time online whenever I needed help. I found in her an expert teacher, magnificent mentor, adorable elder, loving friend and a perfect soul-mate. Today many writers, book loving persons and noble veterans of other fields know me only because Pat Montandon knows me. I traveled from India to California with my wife Dr.Usha in September 2014 just to meet this legendary lady and to participate in her fifth book launch at Book Passage, San Rafael-SF. She welcomed us heartily to her home and introduced us to her friends. Meeting her was an overwhelming experience for us. We were simply mesmerized by her personality and her down to earth attitude. I want to thank Patsy for being such a wonderful and valued friend to me. With my love and gratitude to her 'Pat Montandon Women's Health Care' was started on 1st January 2015. We will continue offering help to needy women till our strength lasts. I also celebrated her birthday by offering food to poor children.   https://www.facebook.com/pages/Pat-Montandon-Womens-Health-Care/1621438708079032?ref=bookmarks 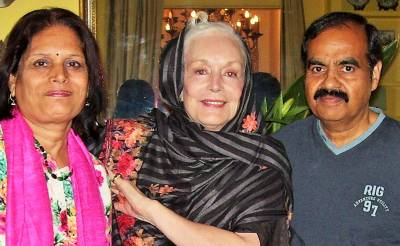 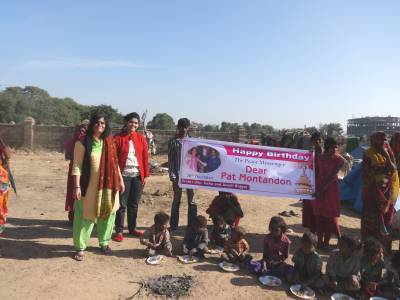 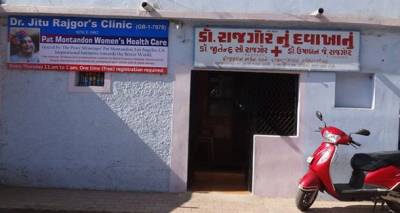 Tags:
friendship gratitude Love Writing
Tweet
Recent Comments
Rosy Cole
Wonderful tribute, Dr Jitu. Patsy's presence was a bright light of the Red Room, her gifts and demonstrable humanity truly inspiri... Read More
Sunday, 25 January 2015 11:39
Jitu C Rajgor
You are right Rosy, she indeed is.
Sunday, 25 January 2015 20:21
Rosy Cole
Perhaps it's worth adding that Patsy was kind enough to encourage me, too, in the early days of our former venue. She is one of th... Read More
Monday, 26 January 2015 11:00
3359 Hits
3 Comments 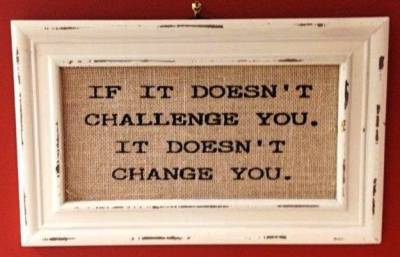 A new energy is blowing in on the swirl of dry and dusty 35 knot, north winds. Its force rattles windows throughout the house as an exasperated energy eager yet unwieldy in its drive to blow through, loaded with new adventures and challenges. It comes as gusts that ignite grass and bush fires to clear remnants of the old and rejuvenate for the new, of hope for better.

‘Forget last year and focus on the new year,’ I’ve heard it said so many times already. Last year brought its challenges and many want improvement. But why forget last year and all its teachings that have made us who we are today, ready for this new year and new adventures? Without the year-after-year of building upon previous foundations we wouldn’t be ready and capable to take on this next year of 2015. I certainly wouldn’t be.

Last year brought a wild ride of endings and beginnings, challenges and triumphs. And with that came all manner of change that toughened and transformed thinking on both global and personal levels.

Conflict and crisis continued around the world and impacted many, like the 12-year old suffering leukaemia who could not receive the appropriate medical attention because of the Israeli/Palestinian conflict. That child died. There was the Ebola outbreak that began in Guinea and spread to neighbouring countries and the two Malaysia Airlines flights that saw 537 people die - one being shot down by a missile over Ukraine with the question of who fired that shot still unanswered, and another that disappeared without a trace. Gough Whitlam died. He passed the Racial Discrimination Act in Australia and introduced free tertiary education and paid maternity leave in the 1970’s. And then there was the quest to land on a comet. So much more news from 2014 can be found at http://www.google.com.au/trends/2014.

My year sparked from the high peaks of the roller-coaster in palpitating and flirtatious heart beats, to my gut being wrenched in crazy plummet from those highs. I questioned honesty and integrity, and what I considered extremist and calculated behaviour when confronted by bullies and a level of betrayal of my openness and honesty. It made me realise once again that what is important to one person may not be important to another and that passions and beliefs fuel actions that are individual to all of us. Simple in its prose but quite a process in thinking!

Success and celebration abounded too, of my children’s achievements and of my own, with people believing in my writing, whether for adults or for children. Sometimes those celebrations came with a twist of quirkiness, as in waiting up until 2.57 am to quietly see in a thirteenth birthday with the birthday boy!

Then Christmas came and suddenly I found myself questioning traditions. A tradition after all, is simply a custom, behaviour or habit that we develop and act on. In my growing family, I never thought we had traditions as each year was different from the next. Until this year when the question was raised about breakfast on Christmas day and how we must have our cooked ham, eggs and croissants as always, regardless of having to prepare for 43 lunch guests, which in itself was another break in tradition. As was New Year’s Eve celebrations when for the first time, the two older boys went to friends’ parties to wait in the new year.

Ultimately, last year was a year that pushed boundaries and thinking and in reality, was an undertone that existed in all previous years too. It highlights one thing: the need to live in fluidity.

There will always be want and desire, challenge and triumph. Some things we desperately desire, others we’re happy to sell off! In the end, all we can do is be limber in our movement through the clearing, in all its frenetic and subliminal under currents.

Best I slide open those windows for as Gough Whitlam once said, "When you are faced with an impasse you have got to crash through or you've got to crash."

The Need to be Loved 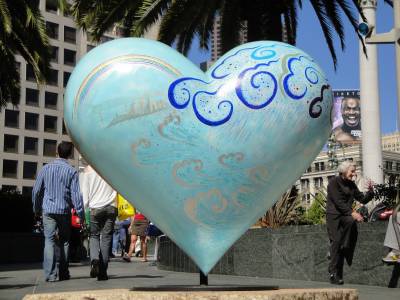 Who does not want or need love?

Otherwise, they conk out.

Some cave in with the lack of love.

Love is a basic ingredient.

It keeps one in balance.

It makes us whole.

Love cheers us up!

Love in any form, shape or size is beneficial.

When there is love there is happiness.

When you give love you deliver a smile.

Just as when you receive love you smile.

The result is always good.

It brings calm and relaxation.

It’s no surprise we all yearn for love.

To be loved and in return we learn to love.

For some, experiencing love has to come first.

How do we learn to love?

I don’t think one can teach love really.

It’s something one has to experience.

Every experience of love, with love and about love is unique.

Our own personal experiences help to define love.

Regardless of how we define love, we all need love.

So why not give love to anyone and everyone.

Love from the outside transforms within.

And love from within nurtures.

We all need love. 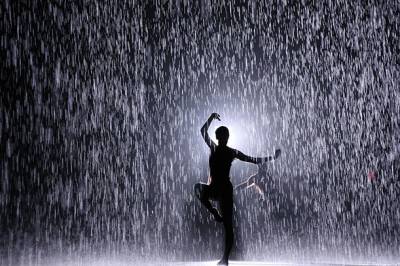 Writing by candle light seems right given the rain that falls on leaves outside my window. It’s a trickling patter that dulls to a thump when it hits the ground. It’s in this dawn before the dawn that life is clearest, as if the rain is washing away a layer to reveal the next delight in fresh rawness.

It’s so transfixing when stopping to listen. Quiet time out. I want to turn up the volume for more!

A rattle of an open window and flicker of flame accentuates a breeze that’s barely audible. But it’s there. Blowing hellos onto my neck that’s undressed, cleared from the old in preparation for what must be part of this next wave blowing in.

A sip of tea, a gulp in decibels not normally measured.

A puff of air swirls in and down to my bare feet hooked under my desk. My toes tingle in a gentle wake up call. I hope the spiders lurking in the dark don’t wake to join in the toe tingling!

Change is stopping by once again. A clearing of the staid like this can only mean change.

The breeze becomes constant and travels around to waft under my nose and cool my lips moistened by tea. Each breath in is sheerer than the last, cleaner, and travels deeper within. The dross is being filtered to expose a new layer.

Here comes that ride of extremes, of loss and happiness and humblings of caring kindness, of passions that can question all that life is. It’s almost as a storm chase of dreams on the curve of any rain drop daring to carry.

Another swirl of breeze, a sip of cooling tea. Chirping song wafts in through my window. All is awakening.

Change equals love, of the self and others. Accepting that change and appreciating it for its place in life as an unknown journey to somewhere new is the key.

A rustle of leaves outside. Change is not easy for many. Taking leaps of faith into unknowns can be more terrifying than anything imagined, crippling. That rumble grows to a thunder … heavier rain sweeps in.

Trusting in that change is part of the change and realising it’s not just about arriving at any end. Change is individual and always laced in a newness nourished by the freshness of more rain.

Change can make any heart sing, even when it can’t be heard. The heart knows what it truly needs. The trick is in letting the heart be to do what it needs to do. And maybe dance with it and the rain, and the rumbles of thunder now cracking.

Tags:
weather unconditionallove rain Love change
Tweet
Recent Comments
Katherine Gregor
Monika, your piece touches the heart. It's so beautiful. And so true.
Monday, 08 December 2014 19:16
Monika Schott PhD
Thanks for saying that, Katherine. Like most writers, I sometimes question what I write!
Monday, 08 December 2014 19:59
3831 Hits
2 Comments
Previous Next
1 2 3 4 5 6 7 8 9